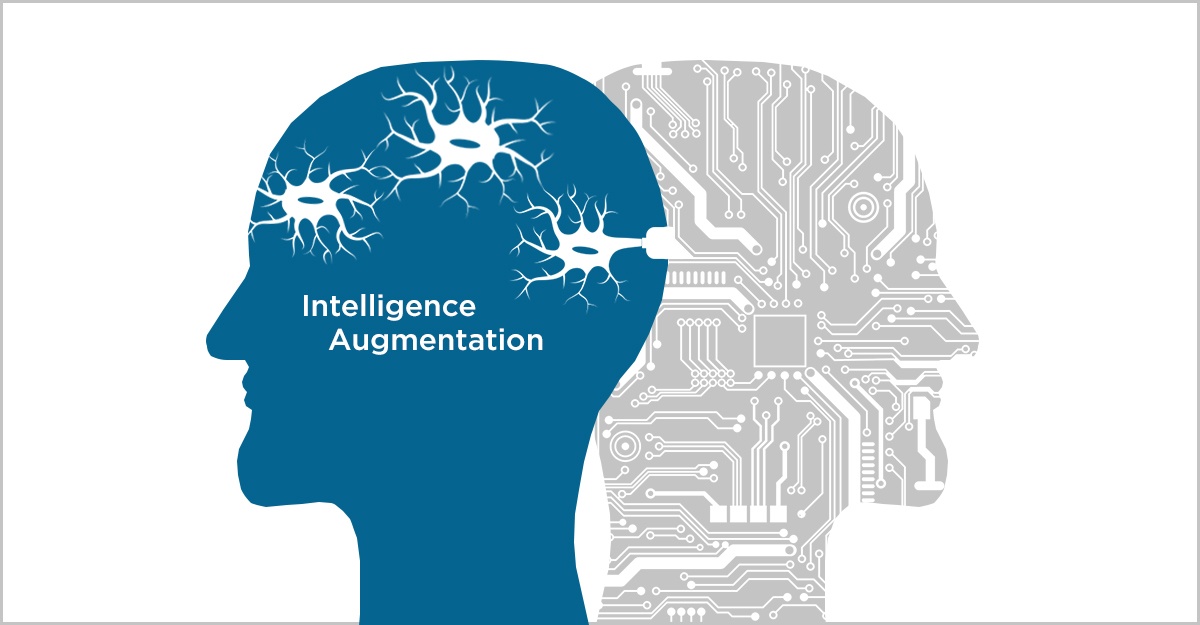 In the past decade, Artificial Intelligence (AI) has transitioned from being the basis of Hollywood movie plots to being very much a part of our current reality. However, somewhere along the line, the definition of AI has been convoluted, resulting in a lot of confusion around what AI actually is.

There’s a lot of information across the web on the topic, but it varies so much that it doesn’t take long to feel overwhelmed, and even more confused. Wikipedia for example, defines AI as “intelligence exhibited by machines, rather than humans or other animals” - a somewhat vague explanation - and the rest of the page is packed with so much information that it’s doubtful most people would bother to read past the first paragraph.

To be fair, AI is a vast and complicated subject. It’s not easy to explain, but I’ll do my best to provide you with a better understanding of what AI is, where AI development is now, and the possibilities of AI in the future. Then I’ll discuss how humans are already combining their own intelligence with AI - a.k.a. Intelligence Augmentation - to accomplish monumental achievements never before known to man.

Let’s begin with a brief breakdown of the three core types of AI:

What we commonly refer to as simply AI is actually Artificial Narrow Intelligence (ANI). Examples of sophisticated ANI include: Google translating a street sign in Russian, Tesla’s autopilot driving you from NYC to Washington DC, and Facebook automatically suggesting you tag your new roommate in a selfie. These systems are a testament to some of the greatest minds and innovators in our century, but they are still very limited. ANI may be one of the most useful tools mankind has created to date, but it is still a tool, and therefore still requires human interaction and instruction.

The simplistic measure of knowing when ANI has truly transitioned into the realm of AGI is when it can fully replicate the level of intelligence and mental skills of a human. To be clear, I’m not saying AGI will be able to feel emotion and have a chat with you about the morality of stem cell research, but it will be able to learn, adapt, think abstractly, and have multi-disciplinary knowledge. Think of Data from Star Trek - he’s an android that was “designed to exceed human capacity, both mentally and physically” (direct quote for you fellow nerds out there).

An example of AGI would be if Tesla created a person-less taxicab (either with or without an android driver) that could see you hailing it, ask you where you’re headed, and find the best route to get to you there, all while having a conversation with you about the latest current event. Unfortunately, we’ll likely never experience Data-like cab drivers...

If I sounded ominous at the end of the last section it’s not as bad as you’re thinking. Well, it might be, but that is still heavily debated by experts. The most commonly accepted reason why we will never really experience AGI is not because a Terminator-esque android will kill us all, but because once AI evolves into AGI, it might only be a matter of minutes until it evolves into ASI.

How can that possibly make any sense? Exponential growth.

We are hardwired as humans to view the world and everything in it as linear, and to predict what’s possible in the future by referencing how/when things have been achieved in the past. Literally throw all of that out of your brain and look at this graph (inspired by this post which you should read if any of this has been interesting to you so far): 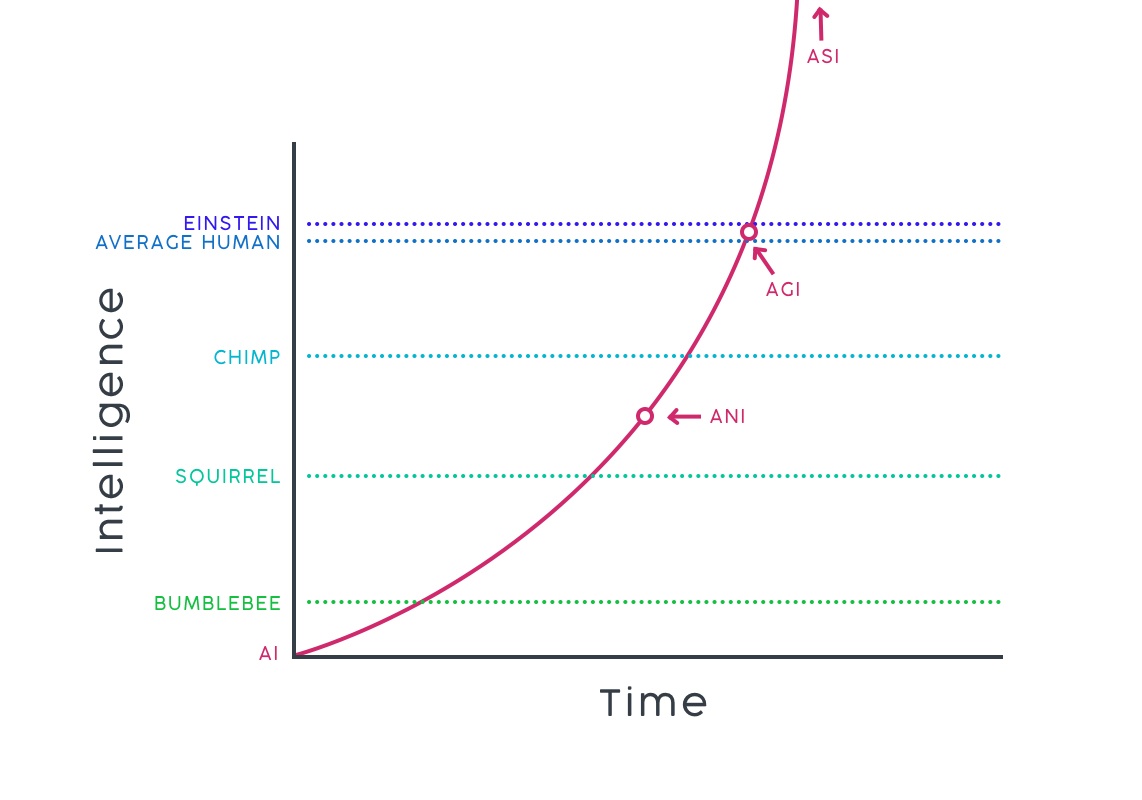 Although leaders in the field can’t agree whether or not ASI will be “friendly,” they pretty much all agree that AI will grow at an exponential rate, and that the median year we will reach AGI is 2040, and for ASI is 2060.


At the current time, no one can really explain what ASI will be exactly. The intelligence of ASI will be at a level at which we simply cannot comprehend, but experts predict that insurmountable problems, as well as problems we didn’t even know existed yet, will be instantly solved with ASI. It has even been speculated that ASI will be able to re-organize atoms to transform matter into whatever tools they need to accomplish a task. That is just one of many ideas, and as I said, there is no way for us to truly imagine the possibilities.

If you’d like to learn more about AI and why people like Elon Musk and Stephen Hawking are losing sleep because of it, read here (same link as earlier - the author is incredibly intelligent and makes everything very easy to understand).

How ANI can help us in the present

Even though we’re still far away from reaching ASI, we can still use ANI to help raise the bar of what humanity is capable of right now. Humans and computers/ANI each possess particular skill sets that become even more powerful when used in conjunction with each other. For example, humans are excellent at hypothesizing, bringing in outside knowledge to an analysis of data, drawing conclusions, etc. Computers/ANI excel at high-speed mathematical computations, applying algorithms to enormous data sets, sifting through all possible options and choosing the best ones, etc. The combination of these two skill sets is referred to as Intelligence Augmentation (IA), and is possibly the best team humanity has ever seen. Real world examples of IA include: amateur chess players with average computers beating grandmasters at chess, engineers discovering new, efficient designs for products that completely break the mold, and companies refining their advertisements to make a bigger impact on targets audiences.

In short, the future possibilities of AI are wondrous and unfathomable, but we should not overlook the benefits that IA could bring to almost every industry in the here and now. In aerospace for example, a specialized ANI could help us find the most efficient aeronautical design to help engineers make better planes. In education, emotion detection could help us teach kids with severe autism to identify emotions. In the auto industry, self-driving cars could bring more independence to the handicapped, and in the medical industry, new computer vision object detection is currently being developed to automatically identify cancer cells and help doctors with diagnosis.

Here’s a real world example of a company that is currently working on this kind of object detection for cancer research:

Dr. Andy Beck, a pathologist at Harvard Medical School and Beth Israel Deaconess Medical Center, and Aditya Khosla, a computer scientist trained at MIT and Caltech, founded the company PathAI in 2016, which, among many other things, uses machine learning and AI to detect breast cancer cells in tissue biopsies. They already experienced early success in a 2016 competition when they saw an error rate of only 7.5%. This did not beat a practiced pathologist who was able to achieve an error rate of 3.5%, but PathAI is confident that theirs will improve over time with more data. PathAI’s technology will most certainly lead to more widespread, real applications of IA as doctors leverage the speed and efficiency of AI to provide faster and more accurate diagnosis to their patients. At the 2016 competition Beck said, “the combination of human [trained pathologist] plus AI in this example reduced the expert's error rate by 85 percent.”

Another leader in the same field, Regina Barzilay, and her team from MIT is working on similar technology and says that their overall goal is to be able to predict which patients have a high likelihood of developing cancer before it shows up in a mammogram. The key to surviving most cancers is catching it early - imagine if doctors were able to catch it before it even exists.

There are many people out there leading the charge for AI and using it to make a difference in the world, but it’s still confined to top technology companies and universities. Let’s stop writing sci-fi about AI overlords and instead try to learn more about how we can use AI to make the world a better and more efficient place.