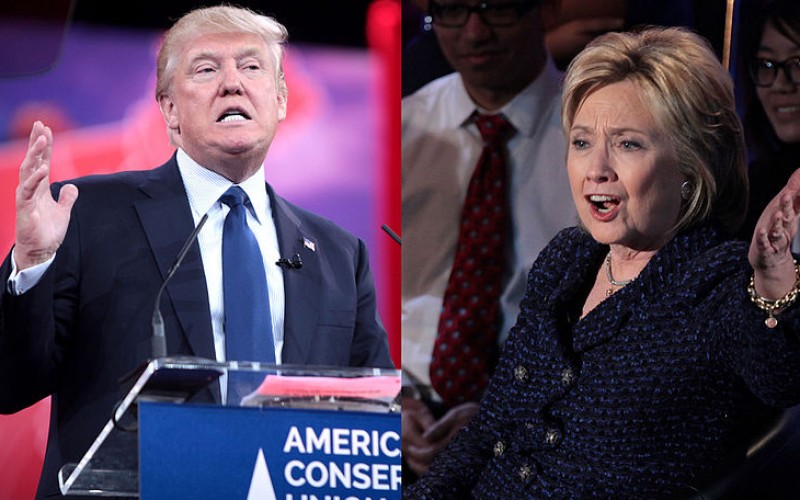 This is how the most famous political ad of all time begins: A little girl is playing in a field. The camera zooms in on her as she starts counting the petals of a daisy. Suddenly, we hear a man’s voice counting down to the detonation of a nuclear bomb - the bomb explodes. A mushroom cloud fills the screen. “These are the stakes,” says Lyndon B Johnson, “to make a world in which all of God’s children can live or to go into the dark. We must either love each other or we must die.”

LBJ’s scathing “Daisy Girl” ad spot, which ran during the 1964 presidential election, not only revolutionized political ads, but also created new standards for what was allowed in “attack ads.” The days of upbeat ad campaigns from the 1950’s were over. From that point on, negative advertising would be commonplace in political elections.

“Daisy Girl” was unprecedented at the time. Not only was it a direct hit at LBJ’s opponent, Republican Barry Goldwater for his pro-nuclear weapon statements towards Vietnam, but it also didn’t feature either candidate talking about the issues. Rather, the ad solely focused on riling up viewers’ emotions by showing an innocent girl amidst the backdrop of nuclear extinction - intentionally stoking the Cold War fears of Americans. It was the first political ad to make such a powerful appeal to viewers’ emotions, and the content was so shocking at the time, that the spot was pulled after airing only once, but not before it become a national news story, inadvertently giving it more publicity. “Daisy Girl” is now credited as being a significant factor in helping Johnson win the election.

Research shows that appealing to voters’ emotions is nearly twice as effective as presenting facts and appearing truthful.

“We can explain 90 percent of the change in voting intention by people’s emotional response alone,” says Dan Goldstein, co-founder of Copypop, an online platform that tests advertisements among consumers. “It turns out there is only one thing that explains people’s vote switching: how the advertising made them feel,” Goldstein says. This couldn’t have been more apparent in the 2016 presidential election, where emotions played a huge role in influencing voters’ decisions - much more than the candidates’ stance on present-day issues.

One of the biggest - if not the biggest - reason why Donald Trump won the 2016 presidential election was because of the emotional influence his campaign had on voters. The Clinton campaign failed to generate the same kind of emotional excitement among more left-leaning voters and millennials who had supported Bernie Sanders in the primaries. Trump was able to create an emotional brand that resonated with voters in and beyond his base. By positioning himself as a Washington outsider, Trump appealed to millions of Americans who were fed up with what they felt was inefficient leadership and “politics as usual” on Capitol Hill. Whether his supporters agreed with Trump’s polices or not, his “maverick” persona is what truly held their allegiance to him. The same could not be said for Clinton, who’s campaign could not completely shake her “career politician” reputation, or emotionally connect with enough voters outside her core base.

Another significant factor that contributed to Trump’s victory was how he was able to generate his own publicity by making frequent controversial statements - which the media jumped on. John Geer, a political scientist who specializes in political advertising, argues that during the election Trump said “something so controversial everyday that you (had) to cover it. It used to be that attack ads were grist for the journalistic narrative. Now, journalistic coverage is driven by what Trump says.” Trump’s outlandish comments and behavior dominated the headlines during the election period and put him front and center of the public’s collective mindset every single day, which helped him reach many more people than he would have if he’d been less controversial.

The answer is both can be effective. Geer argues that on average, positive and negative ads usually have the same small impact on elections. However, negative ads can “move the dials” if they “hook into a really big issue,” but the message of the ads must also be fundamentally true, or they run the risk of backfiring.

In general, creating fear or anxiety in voters can make a difference.“Ads that connect with audiences at a more emotional level can be very effective,” says Travis Ridout, a political scientist at Washington State University. “Fear in particular may be good at converting voters.”

Political scientist Ted Brader argues that “fear is useful in political discourse. It can help direct the public's attention to important issues. It prompts people to seek more information and rethink their course of action. It unlocks the grip that habit holds over people's decisions."

Along with fear, evoking anger can also be a very effective advertising tactic. Research shows that angry individuals are more likely to support risky policies, which might be the reason that anger is used in political oratory during a terrorist attack. Both Hillary and Trump used anger and fear in a number of their campaign ads for the 2016 election.

Here are two of their most popular “attack ads:”

In this ad, Trump makes the claim that Hillary Clinton doesn’t have the “fortitude, strength, or stamina,” to lead the country. The ad attacks Hillary’s health and makes it clear that she was responsible for the problems in Iran, Libya, and North Korea. There are images of North Korean tanks, Isis terrorists, Libya and North African soldiers, and then the ad switches to images of Hillary coughing and being carried to a car after fainting. The text at the end of the ad reads “Donald Trump will protect you. He is the only one who can.” There is no mention of policy anywhere. Rather, the ad uses scare tactics to persuade voters that Hillary would be a weak and ineffective leader. The ad effectively relies on negative emotions to steer voters away from Clinton.

Like the Trump ad above, this ad from the Clinton campaign relies on fear and anger to dissuade Americans from voting for Trump. The ad juxtaposes images of young girls who are unhappy with their appearance with clips of vulgar things Trump has said about women in the past, such as “she ate like a pig, and “a person who’s flat chested--it’s very hard to be a 10.” The video also shows an interviewer asking Trump “Do you treat women with respect?” in which he responds, “I can’t say that either.” At the end of the ad, text flashes across the screen: “Is this the president we want for our daughters?”

The ad was one of the most popular in Hillary’s campaign, as it successfully used emotion to portray Donald Trump as sexist and as an unfit leader.

The benefits of positive political ads

As seen in the 2016 election, negative ads can certainly make a big impact on voters, but positive ads can be just as powerful.

A recent study found that positive ads “proved more effective in creating both the sponsoring candidates favorability and participants’ reported likelihood of voting.” Positive advertising is also more likely to increase voter turnout for the candidate, and it has been found to be most effective when a candidate is winning. Negative ads, on the other hand, should be reserved for when a candidate is losing. The reason for this, according to Travis Ridout, is “if you’re behind, you need to shake things up, and that means making people feel anxious about the other candidate so they will reconsider their voting decision. If you’re ahead and you want to cement peoples’ support, appeal to emotions of pride and enthusiasm.”

Another reason to use positive ads is they give voters a break from the negative advertising that many politicians rely on today. “Sometimes voters get sick of all the negativity,” says Brian Baker, president for the Ending Spending Action Fund, “and they just want to be told, ‘This is a good guy, this is a good person.’ They want to be reaffirmed in that belief.”

Let’s take a look at two effective positive ads from the 2016 presidential election.

One of the most popular ads from the 2016 primary was Bernie Sanders’ “America”, which showed people from all walks of life coming together to support Sanders. What separates this ad from the majority of political ads from 2016, or any year for that matter, is that there is no audio other than the cheering crowds and the recognizable Simon and Garfunkel song, “America.”

According to a 2016 study that evaluated political ads for their persuasive effects, the “America” ad was rated the happiest and most hopeful of the 2016 election. 80 percent of participants said the ad made them feel “a little bit happy and hopeful,” including over 50 percent of Republicans who saw the ad.

The ad relies completely on music and footage of happy people and families in order to convey a feeling of nostalgia, hope, idealism, and change for America. The ad was so well produced, that no words were needed to convey this message, which it did effectively, proving how strongly emotions can communicate the message and persona of a candidate.

Although Bernie didn’t win the primaries, he garnered a large following, partially due to his “idyllic” and “outsider” persona, and his successful ads that reinforced that persona, which appealed to millions of left-leaning Americans who were looking for a change in leadership.

Another popular positive ad from 2016 election was Hillary Clinton’s “Roar,” which featured music from Katy Perry’s hit song of the same name. The 60 second spot, which aired in 11 battleground states, opens with images of different voters standing next to captions of what they are voting for: respect, equality, higher wages, debt relief, the planet, our future etc. Eventually, the ad shows footage of Hillary throughout her career and on the campaign trail as Perry’s song plays in the background.

Like the Sanders’ ad, there are no spoken words, just inspirational music and clips of hopeful and happy Americans. The ad uses positive images of people - instead of a narrator - to communicate the message that Hillary cares about people and will fight for them. The images successfully convey a feeling of optimism and assurance that Hillary would be an effective leader - all without saying a word about policy. It’s also important to note that Hillary doesn’t even appear in the ad until about halfway through the video, reinforcing the message that Hillary’s main concern is the welfare of the people, not herself. This ad is another example of how impactful emotions can be in generating enthusiasm and swaying voters’ feelings towards a candidate.

What makes an effective political ad?

Whether positive or negative, political ads must connect with voters’ emotions in order to be effective. Studies show time and time again that emotions are key motivators in elections, and people most often vote based on how they feel about a candidate, more so than how they feel about policy issues.

“You can’t give people enough facts to fall in love with you,” says Robert Mann, a Louisiana State University Professor, and author of Daisy Petals and Mushroom Clouds: LBJ, Barry Goldwater, and the Ad that Changed American Politics. “You got to move them to fall in love with you. The only way to do that is to make it emotional.”